The 10 Worst Spammers in the World

The Spamhaus Project is an international organisation, based in both London and Geneva, founded in 1998 by Steve Linford to track email spammers and spam-related activity. The name spamhaus, a pseudo-German expression, was coined by Linford to refer to an Internet service provider, or other firm, which spams or knowingly provides service to spammers. Amongst other things, Spamhaus listed the 10 Worst Spammers in the World and they update the list frequently.

The Spamhaus Project is responsible for compiling several widely used anti-spam lists. Many internet service providers and email servers use the lists to reduce the amount of spam that reaches their users. In 2006, the Spamhaus services protected 650 million email users, including the European Parliament, US Army, the White House and Microsoft, from billions of spam emails a day.

Spamhaus is also notorious for blacklisting IPs, Domains without much consultation or notices. A good example is when they blacklisted Google Docs IPs. They also blacklisted CyberBunker which is quite renowned for providing BulletProof Hosting and inadvertently blacklisted many legit clients causing the first of large scale DDoS attack in recent memory. [Source: Wiki]

Up to 80% of spam targeted at internet users around the world is generated by a hard-core group of around 100 known persistent spam gangs whose names, aliases and operations are documented in Spamhaus’ Register Of Known Spam Operations (ROKSO) database.

This TOP 10 chart of ROKSO-listed spammers is based on Spamhaus views of the highest threat, least repentant, most persistent, and generally the worst of the career spammers causing the most damage on the internet currently.

As of 23 November 2016 the world’s worst spammers and spam gangs are:

Detailed records on each spammer or spam gang listed can be viewed by clicking on the names.

I always thought that most of the large spammers are from Africa or Eastern European region (no offense guys – clearly mainline-media portrays it that way). Looking at this list and their location was more of a revelation. Anywho, in case you are lots of emails with links that looks legit (but you think they might contain malwares), then you can use reputed providers online site review tools listed in this page.

Previous Shortest spam run ever – domaincop.org Domain Abuse Notice Spam
Next Get help when your device is CryptoLocked 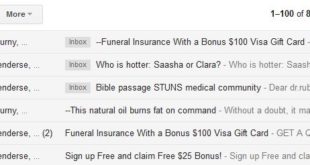 Just something I bumped into this morning and decided to quickly write a post. Woke … 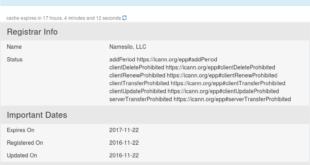 Woke up this morning and found two emails from domaincorp.org in my Inbox stating my domains are being used for spamming and spreading malware recently. Subject line contained “Domain Abuse Notice” which looked serious!