Can’t connect to WiFi in Linux

So I installed the latest version of Kali Linux from USB into my RAZER Blade 2016 laptop. Took a while as it seems after 5 years on non-stop use and abuse, this laptop is finally slowing down. Oh yes, touchpad was disabled the whole time I was installing but keyboard was just fine. After finishing the install and reboot, touchpad worked fine, so I guess it just some quirky driver that doesn’t get loaded during the minimal USB install process. Anyhow, so installed Kali Linux after a long time and to be honest, it looks and feels amazing. Then I tried to connect to Google Nest WiFi and this spinny thing just kept spinning until eventually it failed. I kept trying but I can’t connect to WiFi! 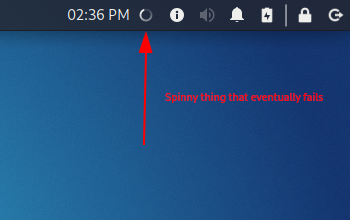 I thought I used the wrong password, so I typed it again just to be sure I didn’t do anything wrong. Nope, spinny thing kept spinning and failed again. Interestingly, during install process it asked me to connect to internet and I typed it in, it didn’t complain, so I assumed it worked and saved the creds.

I rebooted the laptop and tried again, no joy!

I searched Google and it seems it’s not that common, I guess it’s just Google Nest WiFi doing something to cause it. I tried a few things and the only solution that worked is this:

All I needed to do is to change managed=false to manged=true so that the file looks like this:

and then tried to connect to WiFi again and it worked. Not sure if this is something new or old issue or just specific to me, but if you have a similar issue, then this might just work for you. Enjoy.

Previous How to install the noip2 on Ubuntu and run via systemd systemctl (noIP Dynamic Update Client)
Next Use Diskpart to create, delete, clean or extend disk partitions in Windows