Delete clean cache to free up memory on your slow Linux server, VPS

Many Linux systems, servers and VPS’s run on low memory and over time you will see a degradation of speed and responsiveness. By default, Linux got excellent Memory Management and it knows when to clean up cache to free up enough Memory to execute the next command. However, saying that, more new features being added to Linux everyday and when you are playing games, running a Web Server, a Database (i.e. MySQL, PostgreSQL, MariaDB etc.), Network Storage (NAS / SAN ), you will see there’s a drop on speed and responsiveness. By deleting and cleaning pagecache, dentries and inodes related cache data from Memory, you can get free up some of your Memory (RAM) which then makes rest of system work bit faster. This article will show you 3 different options to delete and clean cache to free up memory on your slow Linux server and small VPS’s.

Using drop_caches to clean cache to free up memory

Starting Linux Kernel v2.6.16 ono we have a new mechanism to have the kernel drop the page cache and/or inode and dentry caches on command, which can help free up a lot of memory. However, before we do that, we need to discuss about clean and dirty caches.

When you run something on a Linux system or server, Kernel will try to cache the response for a period of time so that the next time the same request is made, instead of running a complex lookup in disk/process, it can just fetch that info directly from Memory/RAM and send back a response. This is one of the main reasons Linux systems are so much faster and responsive. Alternatively, Linux systems will store data/info in Memory first before writing it to disk. So it goes both ways. Ideally, the data in Disk/database should be the same in Memory. But when you’re playing games, or it’s a busy Linux server, there will be some delay before these two (disk-data and memory-data) can sync up.

Cleaning cache is easy. But in Linux we have what we call clean and dirty cache.Let’s have a quick look at the definition of these two types of caches and later I will discuss why they are important when you clean cache.

Dirty Cache refers to data which has not yet been committed to the database (or disk), and is currently held in computer memory. In short, the new/old data is available in Memory and it is different to what you have in database/disk.

Clean cache refers to data which has been committed to database (or disk) and is currently held in computer memory. This is what we desire where everything is in sync.

Based on that explanation, we can say that drop_caches doesn’t touch dirty caches and only drops clean caches. That means after you’ve used the standard “echo 3 > /proc/sys/vm/drop_caches” command, it will only drop clean caches and all the dirty caches are left behind. This isn’t too bad but we want to free up maximum Memory / RAM for our server.

A nice explanation from stackexchange regarding the importance of syncing cache:

“sync” only makes dirty cache to clean cache. cache is still preserved. drop_caches doesn’t touch dirty caches and only drops clean caches. So to make all memory free, it is necessary to do sync first before drop_caches in case flushing daemons hasn’t written the changes to disk.

So in this article, I will use sync and drop_caches together to ensure we are syncing dirty caches (hence making them clean cache) and then dropping the whole lot:

This is suitable for webserver as they tend to store lots of pagecaches.

To free dentries and inodes:

This the maximum memory cleanup you can do on any Linux system without killing a process.

To free pagecache, dentries and inodes:

When do you run drop_caches? Is it safe?

drop_caches is not a means to control the growth of the various kernel caches (inodes, dentries, pagecache, etc…)  These objects are automatically reclaimed by the kernel when memory is needed elsewhere on the system.

If you use drop_caches command on a busy server, it can cause performance problems. Since drop_caches discards cached objects, it may cost a significant amount of I/O and CPU to recreate the dropped objects, especially if they were under heavy use. Running this command is always a bad idea when your server is under heavy usage.

Depending on your location (geo-location) your server traffic will increase decrease on different time. For example: US users login and browse between 8am – 9pm, that mean you don’t want to run this command on your server if your main userbase is from US. At the sametime, when it’s 12am in US, it’s 12pm in China (I am guessing here). So if your userbase is from China, you might want to reconsider when you want to run this command on your Linux server or VPS to free up memory. Personally, I prefer to do it just before my server gets busier (I get US, India and Chinese users) that means there is little down-period, but I can still squeeze it somewhere.

Because just after your run drop_caches, your server will get busy re-populating memory with inodes and dentries, original Kernel documentation recommends not to run this command outside of a testing or debugging environment. But what if you are a home user or your server is getting too busy and almost filling up it’s memory. You need to be able trade the benefits with the risk. Read below for my explanation.

There are two types of Linux users:

For Home users, duh! do whatever you want … you can just do much damage. You clean cache, and the system will be slowed for about 3 seconds and then re-populate memory with necessary files. You can safely run echo 3 to cleanup maximum memory:

For Servers, (i.e. WebServer, A VPS with Low memory), it is much safer to use option 1, cleaning pagecaches only.

Why? cause pagecaches fills up massive part of your servers memory and in case of a Apache webserver, 50% of memory is used for pagecaches.

You need to run free -m and drop_caches to see the differences:

Run the following command to see how much memory is being committed:

As you can see, my desktop was doing next to nothing, so there’s not much to cleanup.

But because my server is always busy and it’s got a small memory pool (for a server), running drop_caches makes a massive difference:

How awesome is that? In an instant I recovered a massive pool of memory and my terminal to the server became lot more responsive.

Use cron to drop caches regularly

Its a good idea to schedule following in crontab to automatically flushing cache on regular interval.

Edit crontab file and add the following line in red at the end of it.

The command sync; echo 1 > /proc/sys/vm/drop_caches will execute at 4:00am every day.

Alternative you can use also sysctl to change the drop_caches value:

Now, set the permission of script /root/clearcache.sh to 755

There seems to be lot of posts and questions around whether this method should be used or not. Here’s my scenario/explanation:

I’ve struggled months with Linux Kernel panic issue: hung_task_timeout_secs and blocked for more than 120 seconds and tweaking vm.dirty_ratio and vm.dirty_backgroud_ratio allowed my VPS to function normally for few months. Then traffic increased again (and sudden bursts of traffic from twitter and reddit) and I couldn’t afford to increase RAM anymore. This kernel hack (be that may outside of recommended usage) allowed me to use cron and Monit to

without having to do a cold restart. I am not claiming this a perfect solution but if used with ‘sync‘ and  if database optimization is enabled, it is yet to fail me.

Let me put it this way, it is also against recommendation to send a crafted fragmented packet to a server causing an outage, but we’ve all tested our server’s against such attacks.

I don’t think a big organization needs such a hack as for them it’s just easier to upgrade RAM, but for the little guys and VPS owners, this could mean the difference between 90% and 99.9% uptime. (I’ve got 99.7% uptime but that’s my fault, I keep testing in Prod server).

Here’s the RAW logs from today:

As you can see, PageCache was cleaned 4 times overnight, service was restarted only once when Memory reached 97%. I had a massive spike of traffic (200%) at 3am. Normally, most servers would get stuck at and become unresponsive when memory is 97% or +, refer to the Kernel panic link above. This whole time, sar was just cruising along thinking everything just fine (cause it’s set to every 10minutes to save resources) … We use 8GB+ RAM minimum at work for just reverse proxies, but a VPS is no match for that as it’s doing everything from DNS, DB, Webserver, syslog, sshd, cPanel, backup etc. Last but not the least, my uptime during this whole time. As you can see, there were two spikes (the first one caused by me using a script to test load, but it only affects Apache) but 3am one from Reddit and Twitter which caused Disk, IO, Inodes and Apache spikes. They were taken care without human intervention and I slept like a baby.

Saying all that, I am not claiming this is ideal, more like interim solution. If you can just put more resources in, doh, you don’t need anything like this.

I don’t recommend using a cron to run this command as bad things might happen. Let’s just say your server had some unusual user activity in an odd period from a different geo-location than you see (i.e. your post went viral in reddit) and cron is trying to run this command at the same time. The result: instant server crash and possibly a corrupted database. Use it with caution and only when you are logged in. But then again, a properly configured 1GB VPS can take 20-40 concurrent users and run this command at any time.

Home users, go crazy, your online games or low powered Computer can only work better with this command. Server and VPS users, use with caution, only use it when you are unable to increase Memory or you have a good timeframe with low user activities. Whether to use echo 1, echo 2 or echo 3, is upto you and your judgment.

NOTE: Found a better way of maintaining these using crontab and some additional scripts. I will post them later when I am sure they are suitable for every Linux blends. 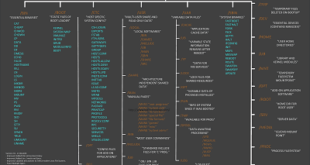 What is a file in Linux? What is file system in Linux? Where are all the configuration files? Where do I keep my downloaded applications? Is there really a filesystem standard structure in Linux? Well, the above image explains Linux file system hierarchy in a very simple and non-complex way. It's very useful when you're looking for a configuration file or a binary file. I've added some explanation and examples below, but that's TL;DR.