There are just too many guides on Cracking Wifi  WPA/WPA2 passwords using different methods. 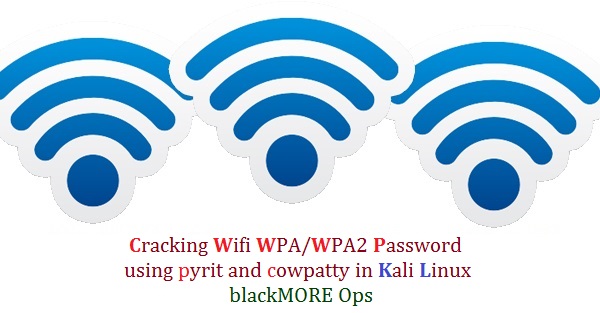 Everyone has their own take on it. Personally, I think there’s no right or wrong way of cracking a Wireless Access Point. Following way is my way and I found it extremely efficient and fast during my tests for Cracking Wifi WPA/WPA2 passwords using pyrit cowpatty in Kali Linux where I attacked with Dictionary using either cuda or calpp (cal++) and at the same time I used WiFite to fast track a few things. This whole process was used in Kali Linux and it took me less than 10 minutes to crack a Wifi WPA/WPA2 password using pyrit cowpatty WiFite combination using my laptop running a AMD ATI 7500HD Graphics card.

You can make the following process faster like I did. If you have an AMD ATI Graphics card you’ll have to follow these guides below:

Readers: Please find the most recent article that applies to your graphics card. It’s getting almost impossible to keep with with updates and changing links alone. Find the article with recent date.

Readers, those who would like to try alternate ways of cracking Wifi WPA WPA2 passwords, use HashCat or cudaHashcat or oclHashcat to crack your unknown Wifi WPA WPA2 passwords. The benefit of using Hashcat is, you can create your own rule to match a pattern and do a Brute-force attack. This is an alternative to using dictionary attack where dictionary can contain only certain amount of words but a brute-force attack will allow you to test every possible combinations of given charsets. Hashcat can crack Wifi WPA/WPA2 passwords and you can also use it to crack MD5, phpBB, MySQL and SHA1 passwords. Using Hashcat is an good option as if you can guess 1 or 2 characters in a password, it only takes few minutes. For example: if you know 3 characters in a password, it takes 12 minutes to crack it. If you know 4 characters in a password, it takes 3 minutes. You can make rules to only try letters and numbers to crack a completely unknown password if you know a certain Router’s default password contains only those. Possibilities of cracking is a lot higher in this way.

Why WiFite instead of other guides that uses Aircrack-ng? Because it’s faster and we don’t have to type in commands..

Type in the following command in your Kali Linux terminal:

You could also type in

If you want to see everything, (wep, wpa or wpa2, just type the following command. It doesn’t make any differences except few more minutes

Once you type in following is what you’ll see. So, we can see bunch of Access Points (AP in short). Always try to go for the ones with CLIENTS because it’s just much faster. You can choose all or pick by numbers. See screenshot below: Awesome, we’ve got few with clients attached. I will pick 1 and 2 cause they have the best signal strength. Try picking the ones with good signal strength. If you pick one with poor signal, you might be waiting a LONG time before you capture anything .. if anything at all.

So I’ve picked 1 and 2. Press Enter to let WiFite do it’s magic. Once you press ENTER, following is what you will see. I got impatient as the number 1 choice wasn’t doing anything for a LONG time. So I pressed CTRL+C to quit out of it.

This is actually a great feature of WiFite. It now asks me,

What do you want to do?

I can type in c to continue or e to exit. This is the feature I was talking about. I typed c to continue. What it does, it skips choice 1 and starts attacking choice 2. This is a great feature cause not all routers or AP’s or targets will respond to an attack the similar way. You could of course wait and eventually get a respond, but if you’re just after ANY AP’s, it just saves time. Once the capture is complete and there’s no more AP’s to attack, Wifite will just quit and you get your prompt back. Now that we have a capture file with handshake on it, we can do a few things: